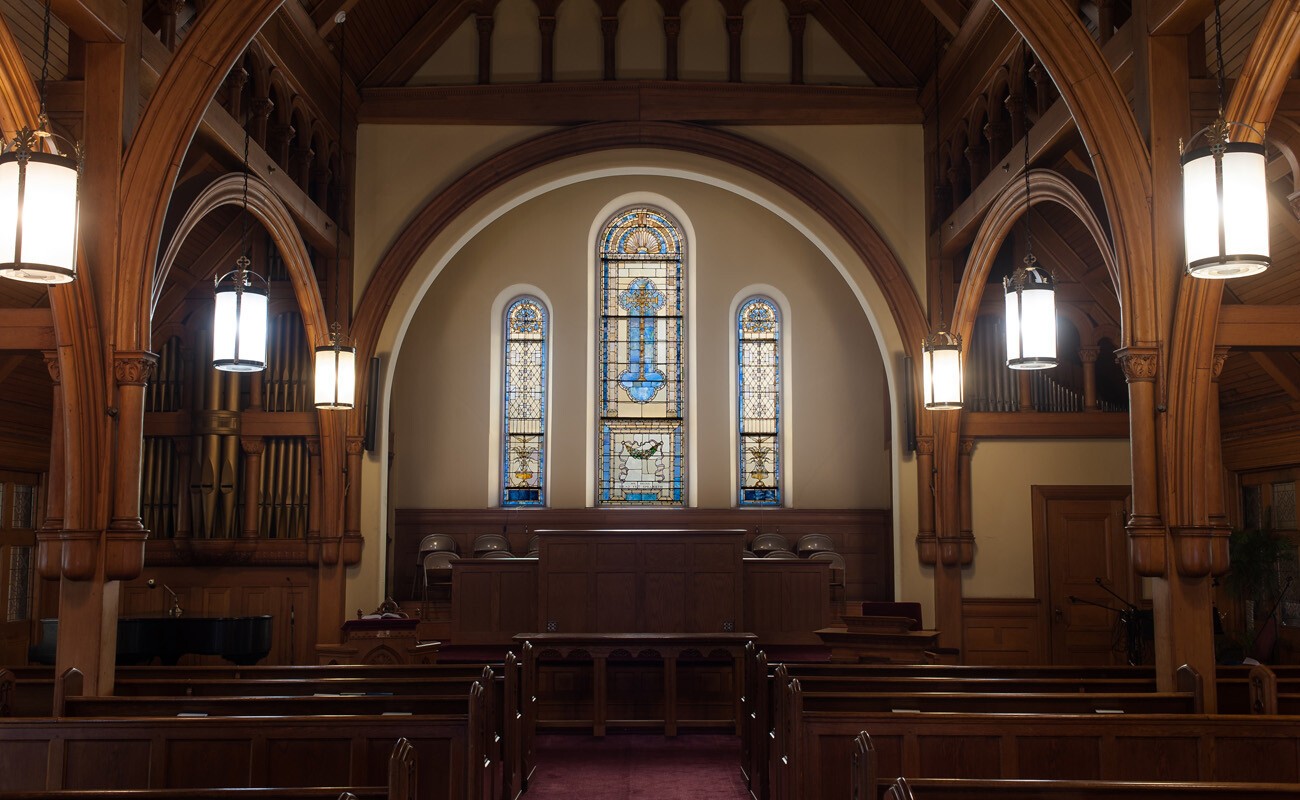 The Presbyterian Church in Madison is the oldest congregation in Madison, New Jersey. The first English-speaking settlers came to the area we now call Madison about 1730; they were Presbyterians and traveled to church in Whippany. Worshippers from Chatham Township, which included the village of “Bottle Hill”, formed their own congregation in 1747 under the leadership of the Reverend Azariah Horton. The congregation built a simple wooden meeting house, unadorned by steeple or bell, on a hillside. The site of that first church is now Hillside Cemetery on Main Street in Madison.

For the next 75 years, this was the only church building in “Bottle Hill”, and its presence stimulated the growth of the town, which included a tavern, stores, and houses.  The early 19th century saw increasing refinement – the main road through town became a “turnpike” and the tolls charged for its use made it a well-maintained and well-traveled route between Morristown and Newark. The village of “Bottle Hill” re-named itself Madison to honor the 4th President of the United States. And in 1825, the Presbyterian congregation built a fine new brick building in the Federal style, along the turnpike and overlooking the old cemetery and original church site. This church building is now the Masonic Lodge, next to Madison Junior School.

In 1887, church members James and Margaretta Webb paid for the building of the Romanesque Revival style Webb Memorial Chapel on Green Avenue in memory of their son. It was designed by J.C. Cady, one of the greatest architects of ecclesiastical buildings in the greater New York area in the latter 19th century. The Parish House was added to Webb Chapel for the Sunday School in 1929. The present sanctuary was built in 1954 to serve an expanding congregation. Its prominent steeple is a Madison landmark today.

The Presbyterian Church of Madison is the custodian of the Revolutionary era Bottle Hill / Hillside Cemetery, which is the final resting place of many of Madison’s early leaders. It is located on Main Street opposite Madison Junior School. Recognizing the enormous historical importance of this site, the church commissioned Jablonski Berkowitz Conservation, New York architectural conservation experts, to inventory the cemetery in spring and summer 2004 as part of a multi-phase historic restoration project.

The public is invited to consult the 2004 cemetery inventory, which includes digital photos, locations, and detailed descriptions of nearly 2,000 markers in alphabetical order. This document is available for genealogical and historical research in the Madison Historical Society wing of the Madison Public Library on Keep Street.

The Main Street site actually contains two neighboring cemeteries in one. The older section on the top of the hill, called Bottle Hill Cemetery (Old Burying Yard), surrounded the original Presbyterian Meeting House constructed circa 1748. The graves of many of Madison’s founding fathers and Revolutionary War soldiers can be found here, including the 1777 table-top marker of Presbyterian Pastor Azariah Horton and the graves of the Gibbons family, the original owners of Drew University’s Mead Hall. Many of the older brownstone markers found here have elaborate inscriptions and ornamental carvings that are historically significant. The middle level of the hill includes markers from the 19th century including Union Veterans.  The bottom portion, Hillside Cemetery which first opened in 1878, was acquired by the Presbyterian Church in 1970.  It has the grave of William O. Stoddard, one of Abraham Lincoln’s three private secretaries, among other interesting makers.